Home » About » Our Team » Bill Hipsher 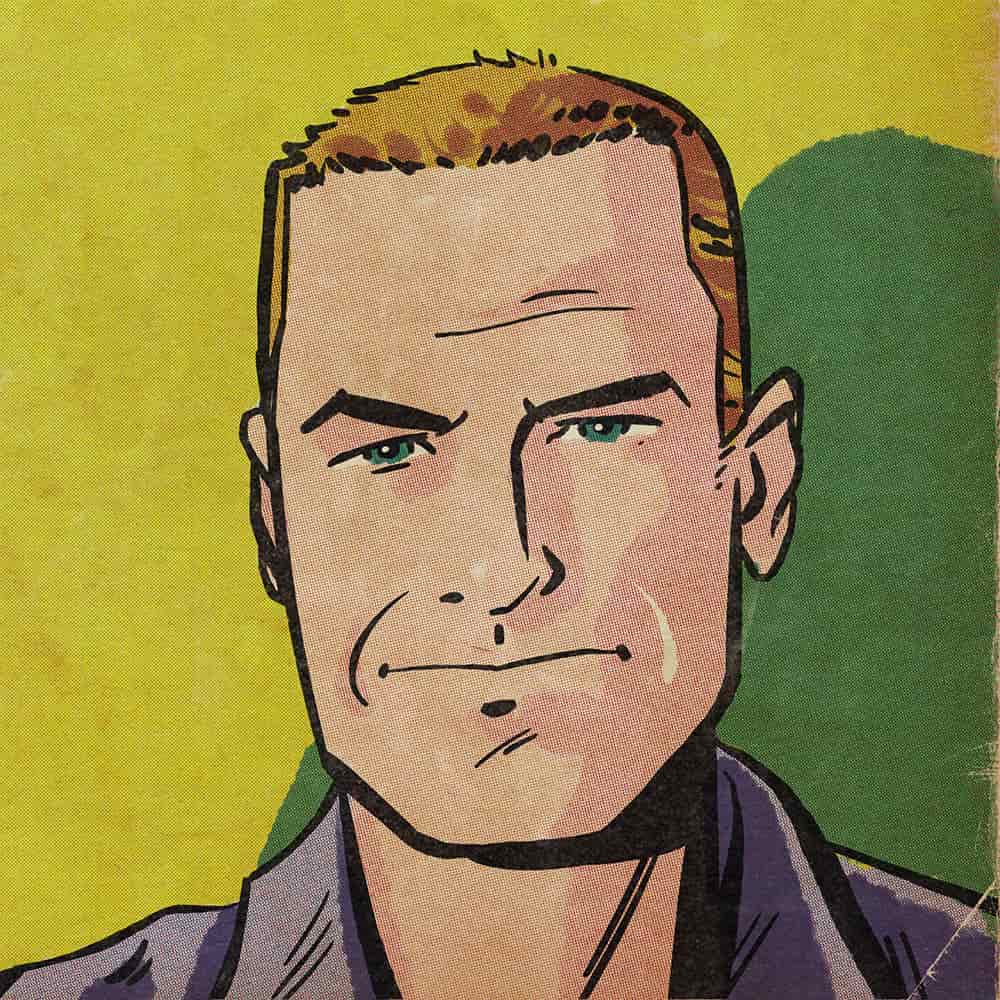 If there’s one thing you can expect when you arrive at the Hurrdat office in the morning, it’s that the light will be on in Bill Hipsher’s office. He might be sitting at his desk, composing emails with the thoughts he’s been chewing on over the weekend. He might be on a phone call, discussing a contract with another early-rising business owner. He might be pacing back and forth across the room with a local news channel on in the background. Nevertheless, you know he’s already been there for a few hours, focused on what’s next.

As President of Hurrdat and an established entrepreneur, Hipsher is constantly thinking about what lies ahead for the media, marketing, and entertainment company. Where the teams at Hurrdat are looking at projects and tasks from daily, weekly, and monthly perspectives, Hipsher is seeing five to ten years down the road.

“How do we level up?” he says. “Services, solutions, people—how do we level up on all of those fronts? If I’m not constantly thinking about that, we’ll fall behind. One of the keys to success is always looking to what we do next. That’s how we push boundaries and get better at what we do so we stay ahead of our competitors.”

Hipsher has approached his entire career with this forward-thinking mindset. From his early insights into the value of web marketing to the entrepreneurial struggles he encountered, Hipsher knows that every step along the way has been in service of moving forward and getting better, smarter, and more efficient.

Originally from La Vista in the Omaha area, Hipsher attended college at University of Nebraska-Omaha, where he graduated with a degree in Real Estate & Land Use Economics in 1999. Upon graduating, he was certain he’d do something with real estate, as he was passionate about architecture, engineering, and development. He began his career in commercial real estate, which he gravitated toward because it incorporated more business aspects, particularly with securing financing and selling commercial properties.

While developing commercial real estate, Hipsher was also developing websites on the side. A hobby-turned-business, web development was something he’d been interested in since the mid-1990s, after the World Wide Web was made available to the public. He tinkered with websites for fun in high school and began building them consistently in college, which made him a valuable vendor for companies that needed tech-savvy assistance with early internet marketing ventures. Referral after referral came in, and Hipsher suddenly found himself running a small web development business called Omaha Web Ventures.

“I was good at sales. I worked with investors and sold real estate, so I was always good at selling,” he says. “But then I kind of stumbled into this web venture. I never intended to build a website marketing company.”

Though he hadn’t expected his career to go down this route—let alone even be an option—Hipsher eventually made the shift from commercial real estate to full-time web marketing.

Hipsher founded internet marketing company B2 Interactive with business partner Brandon Taylor in 2012, just as the digital marketing industry was starting to take shape. Social media platforms like Facebook had begun launching business tools, and search engines like Google were adjusting algorithms to provide better visibility for businesses in search results. Though most large companies had websites by this point, many small businesses were still getting their bearings in the digital landscape and needed marketing help.

Over the years, B2 Interactive developed a robust client list, added top marketing talent to its staff, and acquired other companies to expand its services—including social media marketing agency Hurrdat, which B2 Interactive officially merged with in 2020. Today, Hurrdat is a media, marketing, and entertainment company that provides businesses from small mom-and-pops all the way up to enterprise-level organizations with digital marketing services, film production, podcasting, and more.

Hipsher’s journey from commercial real estate to leading a successful media, marketing, and entertainment company was only possible because he embraced change and looked for what was ahead. Of course, it wasn’t as easy as it sounds. There were plenty of challenges throughout his career that tested his resolve.

“Owning and operating a business is an education process,” he explains. “You don’t come out of the gate successful. It’s all about accepting that you’re going to fail multiple times. You’re going to encounter ventures that don’t work out the way you intended. It makes you feel like a big failure, and it stings. But that’s part of growing in entrepreneurship. You fail, you recover, you come to terms with what went wrong, and you use those lessons to be better next time so that you don’t get into those situations again.”

Despite some hiccups and one or two major setbacks, Hipsher knows he wouldn’t be where he is today without those experiences. They’ve taught him what kind of work he truly values, who he is as an entrepreneur and small business owner, which risks are worth taking, and when to slow down.

“I think the best advice I’ve received—and the advice that’s also the hardest for me to follow—is to slow down. I see all these great opportunities in front of me, and I want to start running, but sometimes I don’t have the muscles necessary to run at that speed, you know? There’s always opportunities to run fast, but that doesn’t mean that I should. And that’s hard for me to do. I don’t want to miss out on something great.”

Slowing down is even difficult for Hipsher when it comes to stepping away from work, which is why his work life and his personal life tend to go in spurts. He’ll work for three weeks straight, putting in six or seven days a week, 16 hours a day. Then, he’ll take some time off to travel with his family before starting the cycle over again. Fortunately, working, traveling, and spending time with family are his primary passions, so he never feels as though he’s missing out by not embracing more hobbies or by getting caught up in his work.

“It’s hard for people to wrap their heads around how that can happen,” he adds. “I have no idea how I’d operate if I started at 8am, had a lunch break, ended the day at 5pm, and didn’t think about work after.”

When Hipsher does need a break from work, that’s where travel comes in. Whether it’s a quick weekend trip or the summer road trip he likes to schedule when his kids are out of school, it’s a way for him to detach.

“The further I get from the office, the more I stop thinking about it. If I can’t go sit down in the office, if I only have my iPad or my phone, I’m limited in the things I can do, so I have to just let myself leave,” he explains.

Interestingly, it’s those moments when Hipsher is out of the office that get his gears turning. Windshield time, as he calls it, and being away from the office give him a chance to clear his head and get some perspective. It’s this process that helps him come back refreshed, ready to start working on the next big thing for Hurrdat.

As Hurrdat has grown as a company in the last few years, Hipsher says his role has shifted. Where once he was bouncing back and forth between sales and development, business operations, and department oversight, now there are leaders within the company who have taken over those responsibilities.

“I feel like my primary responsibilities are casting a clear vision, setting goals, clearing roadblocks, securing resources, and empowering leaders to move our teams forward,” he says. “Basically, the best thing I can do is get out of the way. I’m a pinsetter—I set the pins up, and our team knocks them down.”

Hipsher does still have a fair amount of business development work that he does, particularly in managing relationships with clients he’s worked with for more than a decade and preparing custom strategies. But he often wonders what his career and his role at Hurrdat will look like in five years.

“To see everything working as it should without me needing to be there every step of the way is incredible, but it also makes me think, ‘How do I continue to add value in this role?’ It’s exciting to step back and let capable individuals take the lead. I somehow got lucky enough to get all of our team on board with this vision, and now I have to figure out how I keep that going and where I provide value.”

It took some time to find the right team, but now that he has, Hipsher feels very fortunate, as he believes the right people make all the difference when it comes to being successful as a company. Still, he admits it’s hard to step back sometimes since Hurrdat and everything the company has accomplished are so personal to him.

“It’s like teaching a child to drive. One day, you’re there with them; the next, they’re behind the wheel without you. It’s scary,” he explains. “But if I don’t trust the team to take the wheel, we can’t get to that next level.”

When it comes down to it, Hipsher’s definition of success for Hurrdat is simply finding passion in the work. The variety of projects the company gets to work on alone are exciting to him, but it’s also the surprise of what comes next, as many projects have opened the doors to new clients, new partnerships, and new opportunities that make it rewarding for Hipsher and the team to keep pushing forward every day.

“We should enjoy what we’re doing and be proud of it. I want our team to feel valued and also find value in what we do because, when they care about our company and our work, then our clients see the value of that work. It’s a positive ripple. And after all these years of working hard to build what we have, it’s so amazing that we have everything in place to continue breaking the mould and find joying in our work.”